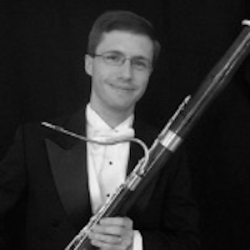 Daniel joined the San Francisco Opera Orchestra in 2012. He began studying bassoon at the age of 13 in South Dakota, where he grew up. From the age of 15, he performed regularly with the Black Hills Symphony, alongside his first teacher, Mary MacPhee. He received his diploma from the Interlochen Arts Academy while studying with Barrick Stees and went on to study with Judith LeClair at the Juilliard School. Daniel served as Associate Principal Bassoon in the Hawaii Symphony’s 2012 inaugural season, as well as with the Honolulu Symphony from 2004-2006. He has also performed with the Utah Symphony under Keith Lockhart.