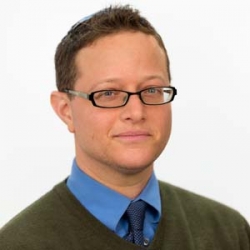 Reuben Zellman was born and raised in California, and has studied and worked in Santiago de Chile, Jerusalem, New York and Los Angeles. He received his B.A. in Linguistics from UC Berkeley, M.M. in choral conducting from San Francisco State University, and M.A. in Hebrew Literature and Rabbinical Ordination at Hebrew Union College. He trained in chazzanut (Jewish modal theory and performance practice) under Cantors Jackie Mendelssohn and David Bentley. Reuben is the Director of Music at Congregation Beth El in Berkeley. His research interests include Jewish music of the Baroque and early Classical periods. An educator in the transgender community, Reuben speaks and has been published extensively on gender identity and religion.