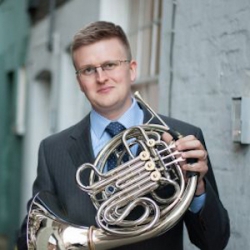 Mark Almond joined the San Francisco Opera Orchestra as Co-Principal French Horn in 2016. Whilst at medical school, he made his professional debut with the London Symphony Orchestra (aged 19) and was later appointed 3rd Horn with the Philharmonia Orchestra of London. He has since played guest principal with the Philharmonia, Royal Philharmonic Orchestra, Royal Liverpool Philharmonic Orchestra, London Chamber Orchestra, City of Birmingham Symphony Orchestra and BBC National Orchestra of Wales. He can be heard on numerous movie soundtracks, including ‘Avengers: Age of Ultron’, ‘Antman’, ‘Chicago’, ‘The Da Vinci Code’ and ‘Harry Potter and the Half-Blood Prince’ amongst others. In addition to playing the horn, Mark is an experienced pulmonologist and general internal medicine physician and has recently been awarded a Ph.D. in immunology and virology from Imperial College, London.