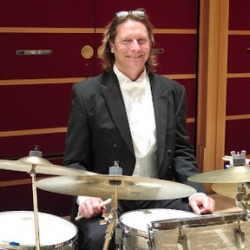 Allen Biggs has been first-call percussionist for musical theatre in San Francisco for over 20 years.  He is the Principal Timpanist with the Philharmonia Baroque Orchestra, as well as Principal Percussionist with the Santa Rosa Symphony.  Allen performs regularly with such groups as the Oakland East Bay Symphony, the Marin Symphony, and backs up groups such as The Who when they are on tour.  Bear Valley, Cabrillo and Mendocino are some of the summer festivals where he has performed.  Allen can be heard on many sound-tracks and was featured on a recording with the Handel and Haydn Society, which won two Grammy awards.  An advocate for both new music and music education, Allen high-lights the music of composers such as Frank Zappa when he performs in schools in the Bay Area.