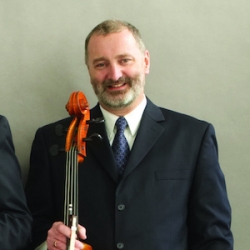 Co-founder and cellist of the Alexander String Quartet, Alexander (a.k.a. Sandy) Walsh-Wilson graduated from the Royal College of Music, London and the The Royal Conservatoire of Scotland in his native British Isles. He completed graduate studies at the Royal Danish Conservatory (DKDM) in Copenhagen while playing in the Royal Chapel Orchestra. In 1977 was appointed principal cellist (at age 22) in the Lucerne Symphony & Opera Orchestra in Switzerland. He came to the U.S. in 1979 and completed further graduate work at Yale University where he founded the ASQ.