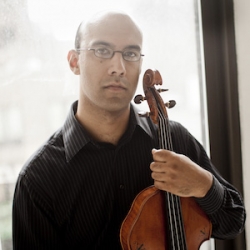 Violist David Samuel has joined the Alexander String Quartet, succeeding founding member Paul Yarbrough in 2021. David was most recently the Associate Principal Viola of the Auckland Philharmonia Orchestra and also the Convenor of Classical Performance at the University of Auckland in New Zealand. He was previously the violist of Ensemble MidtVest in Denmark and was the founding violist of the Afiara Quartet. During his eight-year tenure with the Afiara Quartet, Samuel performed more than 100 works for string quartet in over 400 concerts worldwide. In addition to being the first ensemble ever to receive the Young Canadian Musicians Award, the Afiara Quartet was a top prizewinner at the ARD International Music Competition in Munich, the Banff International String Quartet Competition and the Concert Artists Guild Competition.

Samuel has performed at Wigmore Hall, Berlin Konzerthaus, the Esterházy Palace, Carnegie Hall, Lincoln Center, The Kennedy Center, Library of Congress, at the headquarters of both LinkedIn and Facebook and on "The Late Show with David Letterman." He has performed chamber music with Robert Mann, Pinchas Zukerman, Atar Arad, Michael Tree, Colin Carr, Marc Johnson, Joel Krosnick, Sergio Azzolini, James Campbell, Jörg Widmann and members of the Alexander, Cecilia, Danish, Emerson and Juilliard String Quartets. Samuel has recorded for CPO, Dacapo, Foghorn Classics and Naxos and has worked as a producer most recently for a recording of Mozart chamber music with the Alexander String Quartet and pianist Joyce Yang.

A dedicated teacher, Samuel enjoys a passion and commitment to education. In addition to giving hundreds of educational concerts and workshops internationally, he has been a faculty member at the University of Stavanger, the San Francisco Conservatory of Music Preparatory Division and has held residencies at San Francisco State University, The Juilliard School, The Glenn Gould School and the University of Alberta.

Samuel received his bachelor and master of Music, as well as an Artist Diploma, from the Juilliard School. He also received an Artist Certificate in Chamber Music from the San Francisco Conservatory of Music. His principal teachers were Paul Hersh, Henry Janzen, Michael Tree, and Karen Tuttle.